Local Attorney Back to Fitness After Outpatient Knee Replacement 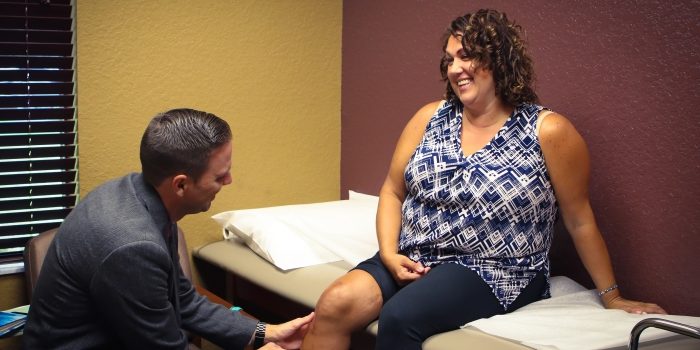 “I gave him a big hug and said I can’t believe you’re the only one that’s been willing to give me my life back.” Two years ago, Dr. Thomasson performed a successful outpatient knee replacement surgery on Alicia, the first of its kind at the Central Florida Regional Hospital.

When people start getting involved in sports and active lifestyles at an early age, arthritis tends to develop at a younger age than usual.

For local attorney and fitness freak Alicia Guardia, it was her right knee, which began troubling her at 19 years old.

“Let’s just say I was 19 and I thought I was a better ice skater than I really was, and that’s when I hurt it [her knee] originally,” Guardia said.

Guardia, now 46, has since been referred to multiple doctors, many of which either turned her down because of the state of her knee and her young age or have prescribed her temporary painkillers and pain-relieving injections.

“Oh you’re too young,” said Guardia’s doctor, after telling her the helpful diagnosis she received. “Your knee is that of a 90-year-old. You’re just going to have to live with it, you are young and it’ll go away.”

After multiple doctor visits over the years, it would take 27 years and a relocation from Cleveland, Ohio to Central Florida before Guardia would have more than just one fully-functioning knee.

Dr. Benjamin Thomasson, the 38-year-old orthopedic surgeon who was at the forefront of Guardia’s successful procedure, has been in practice in Sanford for three years now. Having been involved in completing the same procedure before during his fellowship in Texas, he and his staff were confident they’d make history in Sanford because they’ve had the proper training, experience and procedural equipment.

“Knee replacement surgery is scary to a lot of people because they consider it taking a lot of bone or good tissue out, but rather the way we do knee replacements now is more of a resurfacing if you will because we just trim out the cartilage surfaces that are arthritic,” Dr. Thomasson said.

Using metal surfacing and a plastic bearing called polyethylene, Thomasson and his staff had the ability to balance out and reconstruct the knee and its ligaments. This knee replacement model helps facilitate longevity during recovery. Thomasson had statistics on his side as well.

“The knee replacement model that we use typically has an 85 percent survivorship in 25 years,” Thomasson said. “That’s advantageous for patients who are younger because it means although they may need a revision procedure in their lifetime, they may not need two.”

Rewind to 2014. Guardia is still in Cleveland, Ohio. She has her first major knee surgery which temporarily repairs her ACL and MCL ligaments. Fast-forward to 2018. Guardia is entering her third month of recovery from her second, and if Thomasson’s math is as successful as his surgery on Guardia, and last knee surgery. She’s never felt better.

“It [the surgery] was a complete game changer,” Guardia said. “I gave him [Dr. Thomasson] a big hug and said I can’t believe you’re the only one that’s been willing to give me my life back. It shouldn’t matter what your age is when you’re in pain and your lifestyle is completely destroyed.”

As a result of the success that Alicia’s had through the Central Florida Regional Hospital, Thomasson and his staff have completed over 10 other outpatient replacement procedures through the facility to help return patients to an active lifestyle.

Thomasson hopes Guardia’s successful surgery isn’t just a confidence booster for her, but for the Central Florida community as well.

“It’s exciting to see the buzz in the air now in the community, knowing that patients have these options where the dread of having to stay a day or two or three or four away from your family at the hospital facility, even if you’re receiving great care, can now be alleviated,” Thomasson said. “Now you can recover from surgery safely in a home setting.”